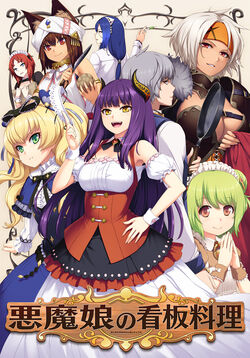 Akuma Musume no Kanban Ryouri emphasizes the element of tavern-management, ranging from adjusting foods menu to building complementary facilities that surround the tavern. One of the most essential things to pay attention is the menu system. Players are presented with ingredients that can be used to unlock recipes. Under the condition that necessary ingredients such as salt or sugar are present, it is possible to improve a recipe's quality. The profits that can be garnered from the dishes are determined by its overall quality, popularity with the customers, and the season that it is featured. Many other elements include hosting events to build reputation, doing quests, etc.

Each run has a limited number of weeks (essentially 144 turns). Players receive an ending depending on their actions over the run. If the bank balance goes negative at any point during the game, players lose the run with a game over.

Located at the main crossroads, the town of Kaste is known for being a border town with monsters appearing nearby. Gin decides to start his second life by opening a shop in a corner of this town. However, things don’t go smoothly for a newcomer to the business: there are problems with the locals, roaming monsters, and rowdy adventurers. Lucky for him, he has his trustworthy allies at his side! With their assistance, with also some troubles they bring along the way, will his shop become prosperous?

Retrieved from "https://softhousechara.fandom.com/wiki/Akuma_Musume_no_Kanban_Ryouri?oldid=7747"
Community content is available under CC-BY-SA unless otherwise noted.