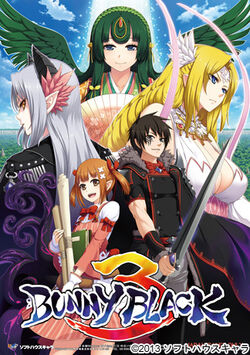 Bunny Black 3 (バニーブラック 3) is a 3D dungeon role-playing and town-management simulation game, developed and published by Softhouse Chara for Windows platform. It is the 19th installment of Softhouse Chara games.

Bunny Black 3 primarily retains the basic dungeon-crawl and RPG elements that its predecessors used, with a few minor changes and revisions. One feature that is newly added to the installment is the town-management system.

Complete dungeons and build a prosperous town are the main objectives. There are 4 kind of resources that prove to be vital for the town's well-being, namely workers/residents, foods, money, and materials; all of which can be found by exploring dungeons, "expedition" by the game's term, or by building certain complementary facilities.

After marrying the Maou (Demon King), the adventurer Darks became the Maou himself. One day, while he was doing his job, an observer with the name, Mcdoll, came from the demon world. She deemed his abilities to be insufficient and ordered him to build a town to prove himself. It was an arduous task, but with the help of his numerous wives, daughters and other girls, and his deep desire to do it for them, he was determined to get the job done. However, with interferences coming from resistance forces and conspiracies from the heavens, will he be able to succeed?

Retrieved from "https://softhousechara.fandom.com/wiki/Bunny_Black_3?oldid=7262"
Community content is available under CC-BY-SA unless otherwise noted.