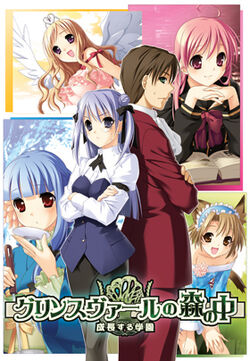 Greensvale no Mori no Naka (グリンスヴァールの森の中) is a school-training simulation game, developed and published by Softhouse Chara for Windows platform.

Chris is appointed as a school’s headmaster by the King. He is disappointed to learn that the school building consisted of only a hut in a forest. Motivated by his own visions and dreams, Chris begins to build classrooms and search for teachers and students in order to get the school running. The ordeals he face are plenty and come gradually; financial difficulties, impossible orders from the King, troubles arising from students and graduates, and his own scandals. Will he be able to overcome the ordeals and develop an academic city?

Retrieved from "https://softhousechara.fandom.com/wiki/Greensvale_no_Mori_no_Naka?oldid=6006"
Community content is available under CC-BY-SA unless otherwise noted.