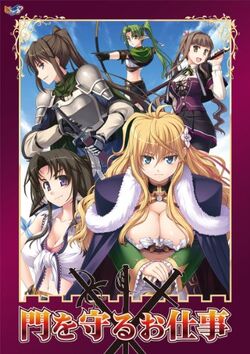 Mon o Mamoru Oshigoto (門を守るお仕事), lit. Your Job is to Protect the Gate, is a tower defense-pseudo and mercenaries-management simulation game, developed and published by Softhouse Chara for Windows platform. It is the 18th installment of Softhouse Chara games.

The primary objective in Mon wo Mamoru Oshigoto is to prevent enemies from breaking through the gate. Formulate strategies and position traps, units, and structures accordingly to halt the invasions during battles. However, resources, like money, are not unlimited; good planning and management are essential in order to complete the game.

The two powerful kingdoms of Graford and Raikana have continued to wage war across the lands, trapping small country coalitions in the midst of it.

Many staging points were made as a result of the war, eventually developing into big cities on their own. One such place is the town of Riruzo, where the protagonist leads hired mercenaries in preparation against the enemy, though fighting is not the only means to deal with them. All these require monetary funding and working for the city while dabbling in backroom deals are some ways to earn it.

There is only one purpose, to protect the gate from invaders.

Retrieved from "https://softhousechara.fandom.com/wiki/Mon_wo_Mamoru_Oshigoto?oldid=6940"
Community content is available under CC-BY-SA unless otherwise noted.