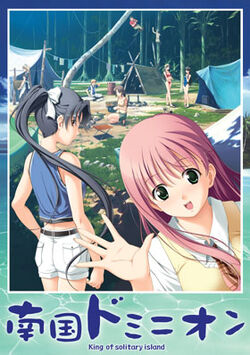 Nangoku Dominion (南国ドミニオン), or King of Solitary Island, is a survival simulation game, developed and published by Softhouse Chara for Windows platform.

Nangoku Dominion features simulation of survival on a deserted island. In order to survive, players must build shelters and other helpful facilities, gather foods, and interact with the other residents to get them as trustworthy allies... or bitter enemies.

Aloha is an amnesiac young man. Upon finding himself stranded on a tropical island along with nine other people (six girls and three men), who were also victims of various public transportation crashes, Aloha is determined to survive on the island with any means necessary. He is able to remember most things. However, his recollection on either his family or why was he on the plane that led him to this predicament is simply blank.

The island they are on is volcanic, which means it can erupt anytime. It's either escape or be rescued. While surviving is the primary objective, Aloha can also choose to learn more about himself in order to regain his memories and try to get along with one of the girls to escape from the dangerous island with her. To complete those objectives, he has to be the King of Solitary Island!

Retrieved from "https://softhousechara.fandom.com/wiki/Nangoku_Dominion?oldid=6404"
Community content is available under CC-BY-SA unless otherwise noted.