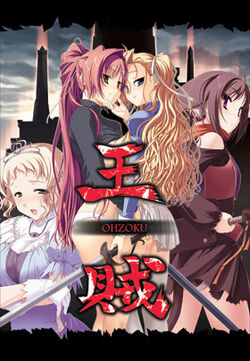 Ohzoku (王賊), lit. King of Bandits, is a war simulation game, developed and published by Softhouse Chara for Windows platform.

Ohzoku is a turn-based tactical game that emphasizes units management and mission planning. As the game progresses, more storyline-missions, side missions, and event missions will be unlocked. In order to complete the game, player must finish all of the storyline-missions.

In a world where the victor gets to be king (王, "Oh"), and loser goes down in history as bandits (賊, "Zoku"), the kingdom of Visto started a large scale military expansion to dominate the continent.

The main character, Jin, was a famous strategist general defending his nation against the invasion, but due to traitors backhome, his nation was eventually conquered. Now, the kingdom of Elt seeks his expertise to help them defend against the Visto army. To Jin, this is a great opportunity for revenge against Visto, and well as a chance to get a kingdom's ransom worth of... women!

Retrieved from "https://softhousechara.fandom.com/wiki/Ohzoku?oldid=7518"
Community content is available under CC-BY-SA unless otherwise noted.