Start a Wiki
Out Vegetables
アウトベジタブルズ 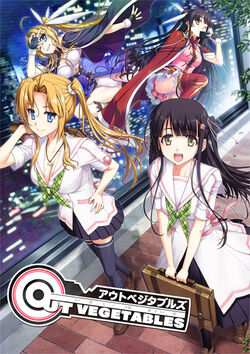 Out Vegetables (アウトベジタブルズ) is a thievery simulation game, developed and published by Softhouse Chara for Windows platform. Chronologically, it is the 21st installment of SHChara games.

Out Vegetables is a simulation of thievery game that emphasizes skills, or cards, management and utilizes them to infiltrate target buildings. In every room inside a building, there is always a number signifying how high of cards' point you have to sacrifice in order to complete said room. Failing to meet the requirement point results in various penalties, such as minor increase in the other rooms' requirement points, minus completion points (determines your rank among thieves), or several cards getting thrown to the recycle bin, which would highly likely incumber your flexibility going forward.

Collecting information regarding the target building before attempting infiltration is highly encouraged, as it can locate the positions of treasures within said building, thus saving you both time and cards. Players must outsmart and outrun the rival characters in order to be the best thieves there is.

There were two wishes in the world: one was an immoral wish to become a phantom thief, the other was a perverted wish to have one’s treasure stolen by a phantom thief. It would not have been a problem if wishes stayed as wishes, but the two people who harboured these desires met each other. A ‘night festival’ was established under the dark side of a mega-corporation as a competition for phantom thieves. This is where the story begins for Zenshirou and the two phantom thieves-in-training girls who he leads, Tomoe and Mirai.

Retrieved from "https://softhousechara.fandom.com/wiki/Out_Vegetables?oldid=6709"
Community content is available under CC-BY-SA unless otherwise noted.