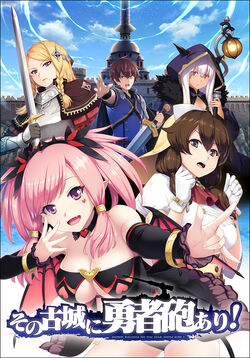 Sono Kojou ni Yuusha Hou Ari! (その古城に勇者砲あり！), lit. There's a Hero Cannon in that Old Castle!, is a tower-defense game, developed and published by Softhouse Chara for Windows platform. It is the 23rd installment of Softhouse Chara games.

Sono Kojou ni Yuusha Hou Ari! adopts core system similar to that of the amalgam between Suzukuri Dragon and Mon wo Mamoru Oshigoto, though not as complicated as either of them. Player's primary objective is to defend the castle from the invaders while also razing nearby locations of interest by using the castle's cannon, which utilizes mana that is obtainable through sexual actions for its ammo. Progress through the storyline by destroying the target locations, doing it quickly will net you completion bonus.

The hero Oura arrived at an old castle on his journey to defeat the demon king. By chance, he discovered an ancient super-weapon called the ‘hero cannon’ (yuusha-hou), which only activates by engaging in sexual activities with females! Together with the failure of succubus Tina, jealous childhood-friend and healer Freya, overly-serious royal knight Mira, and self-centered magician Ekuri, Oura’s battle begins!

Retrieved from "https://softhousechara.fandom.com/wiki/Sono_Kojou_ni_Yuusha_Hou_Ari!?oldid=7745"
Community content is available under CC-BY-SA unless otherwise noted.