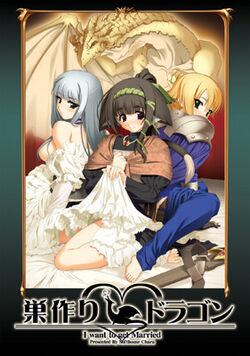 Suzukuri Dragon is a nest-making simulation game that focuses at protecting the Dragon's nest, which also stores important resources and valuables, from various kind of invaders. The battle system is similar to tower defense, in a sense that players have to position their units/monsters accordingly to intercept enemies. If victory is less than assured, players could also build some facilities or traps within the nest - some of them might prove useful against certain type of enemies.

Monsters and facilities play vital roles in defense. However, resources are sorely needed to make sure that your arsenal is well-upgraded. To rectify aforementioned issue, the game features an option to raid towns. Keep in mind that it will surely raise your notoriety, thus also provokes more people to invade the nest. Take extra precautions before initiating one.

A dragon male (the protagonist) must, in order to get married, amass a lot of treasures and wealth in his dungeon. For that reason alone, the Protagonist went alone and lived in a remote area, constructed a huge nest and started amassing treasures. However, soon after the nest got built, gallant heroes wanting to exterminate dragons, townspeople that see the dragon as a nuisance and adventurers and thief are out to get the Dragon's treasures.

With this, he couldn't gather treasures at ease. Therefore, the Protagonist hired monsters, added traps and threatened the neighboring area to not approach his nest. With his nest's defense strengthened, the Protagonist started gathering wealth again. He searched for a gold mine all over the place, started farming, deforested the forest to build drawers out of it. Of course, the foolish invaders that's successfully repulsed are stripped of all their possessions. Incidentally the female invaders are used as sparring partner to gain experience for the honeymoon.

Will he succeed in amassing treasures and marry his fiancée? Or would he meet some other woman throughout the way...?

Retrieved from "https://softhousechara.fandom.com/wiki/Suzukuri_Dragon?oldid=6862"
Community content is available under CC-BY-SA unless otherwise noted.